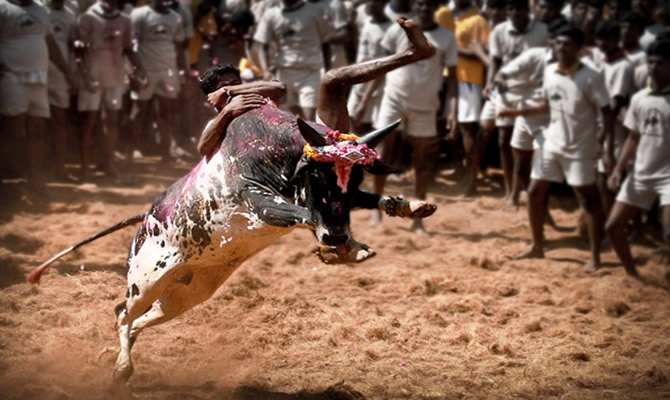 Image of a bull tamer tackling a bull during the Jallikattu event. Credit: Wikipedia – By Iamkarna’ – Own work’, CC BY 3.0, https://commons.wikimedia.org/w/index.php?curid=10522350

According to officials in the town of Palamedu in Madurai district, at least one person was gored to death during a bull dressage competition in India Last weekend.

As reported by India today On Monday, January 16, the deceased was participating in the controversial Jallikattu event in the southern state of Tamil Nadu.

The injured man, said to be in his 20s, was rushed to the Madurai Rajaji Government Hospital. The doctors did their best to treat him, but he unfortunately succumbed to his injuries on Tuesday the 17th.

He was locally named as Aravind Rajan, who had nine of the bulls at Palamedu before being fatally gored. Six more people were admitted to the same medical center with various injuries sustained at the event.

Police officers in the Madurai district of Tamil Nadu reported that a total of 31 people suffered injuries during the Jallikattu event. Around 800 bulls were released from their corrals during this year’s event, with the participation of 335 tamers.

Tamil Nadu | A bull tamer was injured in the #jallikattu event in Palamedu. She is receiving medical treatment at the Palamedu primary care center. pic.twitter.com/PKYRbXTF83

At least 15 others were injured in a similar event organized nearby. Andhra Pradesh on the same days, according to India today.

Jallikattu is believed to be one of the oldest sports activities in the world. Dating back over 2,000 years, it heralds the arrival of the winter harvest in India each year. As the name implies, the goal is not to kill the bulls, but to try to get the best out of the animals.

#TO WATCH | Tamilnadu: #jallikattu ongoing event in Palamedu of Madurai district. The event started here today, one day after the event in Avaniyapuram. pic.twitter.com/IKd7liA2W4

A maximum of 25 bull tamers are allowed inside the arena at any given time, and only for 45 minutes. Each bull has a flag attached to its horns and participants must attempt to remove the flag and even try to stop the creature from coming to a complete stop.

Dozens of would-be bull trainers have been injured during this event over the years, including bystanders. Around 1,500 police officers were deployed for the event, along with 160 medical personnel, six ambulances and 60 vets, all prepared for emergencies.

In 2014, the Supreme Court of India sparked mass protests in Tamil Nadu when it banned Jallikattu. Three years later, in 2017, the Tamil Nadu state government won a tough battle to have the ban lifted. Animal rights activists claimed that before the bulls were released, they were cruelly fed alcohol.