Washington After weeks of hesitation, the USA Tank deliveries to Ukraine He decided. A battalion of 31 M1-Abrams tanks is planned to support Ukraine on the battlefield in the future. The White House announced Wednesday. The announcement came shortly after. Germany’s decision to send Leopard 2 tanks to Ukraine.

In addition, the US is providing eight M88 recovery vehicles, so-called armored recovery vehicles, which are intended to ensure the complicated maintenance of the Abrams. The shipments are valued at $400 million. US media had already reported on the decision on Tuesday, with confirmation and details still pending.

The President of the United States made a phone call on Wednesday morning. Joe Biden with the governments of Paris, London, Rome and Berlin to underline the “strong alliance of the West” in the war in Ukraine. He soon wants to explain the tank deliveries to the American public in a speech.

However, American tanks are not immediately available to the Ukrainians. A senior US administration official admitted that the actual deployment was “months rather than weeks” away. Due to their turbine engines, the 70-ton trucks consume a lot of kerosene and require extensive training to use.

The White House left it open where the training should take place. More recently, the Americans had used US military bases or locations in Germany to train defense teams. The only thing that is certain is that “the training takes place outside of Ukraine,” the government official said.

With its own supply of tanks, Washington has resolved a blockade in the German position on the use of Western tanks. The decision “unleashed Germany’s leopards and gave the Ukrainians the opportunity for a combative counter-offensive,” Peter Rough, director of the Europa Center at the Hudson Institute think tank in Washington, told Handelsblatt.

“It’s a good result after a bad process,” said former adviser to former President George W. Bush. Because the federal government, as US government officials had suggested, only wanted to supply German tanks in cooperation with the United States. Fighting for a common strategy strained the transatlantic relationship.

In Washington, there is growing concern that Russia it could feel buoyed if the West falls apart over the tank issue. For this reason too, according to diplomatic circles, efforts were being made to find a solution that would make Berlin happy.

Biden’s national security adviser, Jake Sullivan, negotiated “intensively and repeatedly” with Berlin. “Transatlantic unity is our greatest strength,” a White House statement said. It is recognized that Germany is also making a significant contribution to the Ukrainian war. “The turning point in German security policy is really remarkable,” he said, “we work hand in hand.” 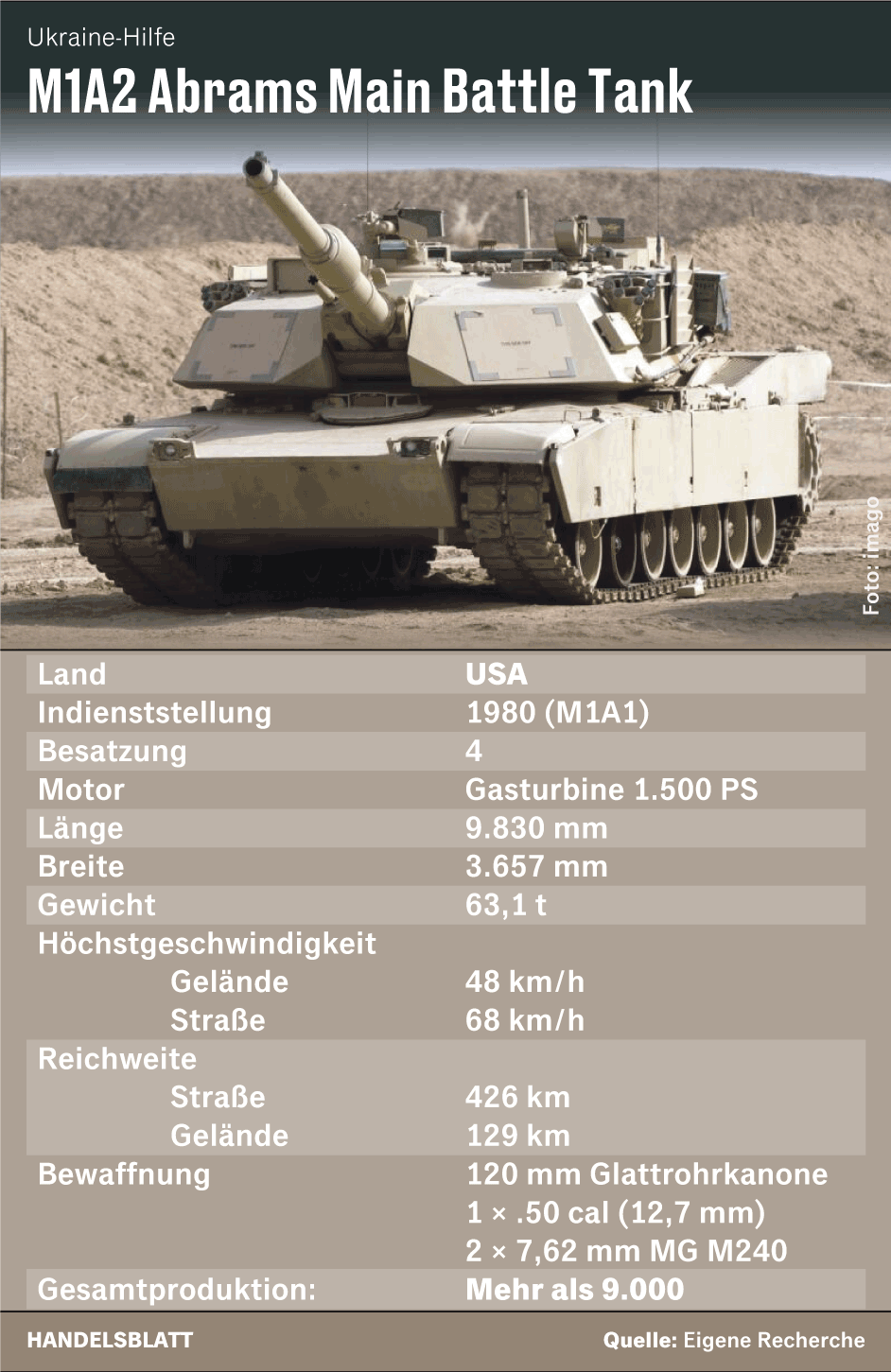 To accommodate Germany, Biden apparently prevailed against the evaluation of his ministries. Because US Secretary of Defense Lloyd Austin and General Mark Milley had advised against the Abrams mission to the end: the tanks were too complex, too heavy, too fuel-intensive, they explained. American tanks in Ukraine “just don’t make sense right now”, if that Defense Department emphasized on Friday.

American and German tanks in the Crimea?

Since the US has just assembled a $2.5 billion weapons package, the tanks will not be financed from the budget. Instead, a fund called the Ukrainian Security Assistance Initiative (USAI) comes into play. Allows the US government to obtain weapons from private industry and allied countries, instead of existing weapons inventories.

With the fund solution, the United States will not have the shame of having to send tanks to the battlefield immediately. At the same time, the US government is giving Germany political cover to supply its own tanks. The Abrams tanks, government officials said Wednesday, are designed more as a “long-term investment in the defense of Ukraine,” unlike the German Leopards.

As one official put it, the tanks could help Ukraine “recapture Ukrainian territory.” This also includes Crimea, he emphasized to her when asked. Crimea is occupied by Russia, but is still internationally recognized as Ukrainian territory. For several weeks, security experts have been discussing the scenario that the Ukrainians could enter the Crimea with American and European tanks, which could result in an unpredictable reaction from the Russians.

This is how the Handelsblatt reports on tank deliveries to Ukraine:

Therefore, the Biden administration sees each new military delivery as a balancing act. For example, Washington does not want to send long-range missiles that can penetrate deep into Russia in the war-torn country. Because that could involve the US and its allies in direct conflict with Vladimir Putin, the US president warned.

Biden is also under pressure at the national level, because there is not much scope for additional military equipment. parts of republicanwho have dominated the House of Representatives in the US Congress since January, want to block aid to Ukraine.

the Corruption accusations against the Ukrainian government further complicate the situation. So far, most US citizens support funding for Ukraine, but support is falling, according to polls. The US State Department said Tuesday it had no evidence that US aid was misappropriated in the Ukraine corruption scandal.

More: The Leopard 2 and Abrams 1 can do that.