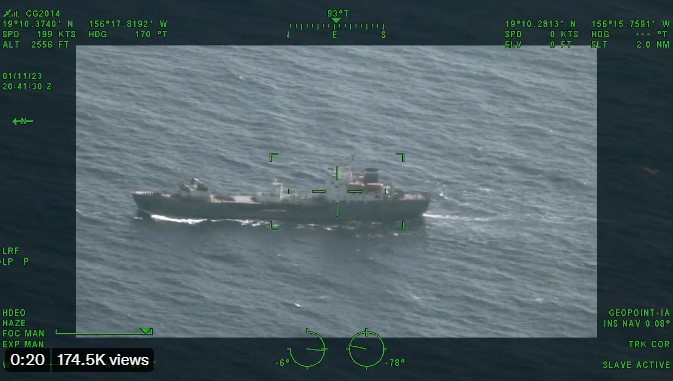 The US Coast Guard has been tracking a suspected Russian spy ship in international waters off the coast of Hawaii for several weeks.

The US Coast Guard has revealed that it has been tracking the movements of a ship it believes to be a suspected Russian spy ship near Hawaii for the past few weeks.

A statement posted on Twitter by the USCG on Thursday, January 19, read: “In recent weeks, the @USCG has continued to monitor a Russian ship, believed to be an intelligence-gathering ship, off the coast of the Hawaiian Islands.”

In recent weeks, the @USCG has continued to monitor a Russian ship, believed to be an intelligence ship, off the coast of the Hawaiian Islands.⁰

As explained by the US Coast Guard, foreign military ships are allowed to circulate through the waters of the United States. However, it is still monitoring the movements of the Russian vessel and sharing updated information with the Department of Defense.

“While foreign military vessels are free to transit through the US Exclusive Economic Zone (EEZ), under customary international law, foreign-flagged military vessels have often been observed operating and loitering within the response area. of the Fourteenth Coast Guard District,” said a USCG press release from Cmdr. Dave Milne.

“As part of our daily operations, we track all vessels in the Pacific area through surface and air assets and joint agency capabilities. The Coast Guard operates in accordance with the international laws of the sea to ensure that all nations can do the same without fear or competition. This is especially critical to ensure freedom of movement and navigation throughout the Blue Pacific,” she added.

Last May, US authorities monitored another Russian ship in the vicinity of Hawaii that was acting in an “unsafe manner.” As a result, the US Forces Indo-Pacific Command went on alert.

Tensions between Washington and Moscow have reached Cold War levels since the start of Russia’s invasion of Ukraine on February 24. At the end of December 2022, the United States approved budgets that ensured that Kyiv would receive about 42,000 million euros in military aid in 2023.