US calls for more military aid to Ukraine in Ramstein 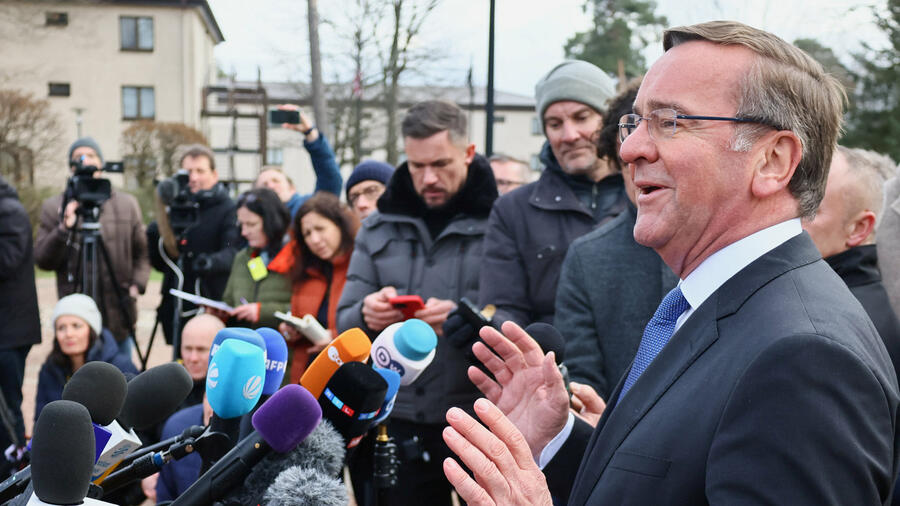 Berlin, Ramstein The federal government has not yet made a decision on the supply of Leopard main battle tanks to Ukraine or the approval of supplies from other countries. However, the new Federal Defense Minister Boris Pistorius (SPD) gave his ministry an order to check how many Leopard 1 and 2 tanks were available in the Bundeswehr and industrial stocks.

“We are preparing for the worst case scenario,” Pistorius said on the sidelines of the so-called Ukraine contact group meeting. Defense ministers from around 50 countries discussed more support services for the Russian-attacked country at the US airbase in Ramstein on Friday.

US Defense Secretary Lloyd Austin said after the meeting that there was no word on the possible delivery of the main battle tanks. He referred to the statements of his German counterpart. At the same time, he called Germany a “reliable ally” that had already done a lot to support Ukraine. Asked if Germany was up to its leadership role in Europe given the tanks’ faltering, Austin said: “Yes, but we can all do more.”

The meeting was linked to high expectations that the allies would take another qualitative step in supplying Ukraine with weapons and also provide battle tanks. Ukraine’s President Volodymyr Zelensky, who first addressed the contact group via video link, urged urgency. “We must act quickly,” he said. “The Kremlin must lose.”

Countries like Great Britain, Poland and Finland have declared their intention to supply Challenger and Leopard main battle tanks. Since the Leopard tanks come from German production, the federal government would have to agree to a transfer. The Warsaw government had made it clear that, if necessary, they would also deliver without waiting for the necessary approval from Berlin.

However, according to Pistorius, “there is no unanimous opinion” among the countries that support Ukraine on the issue of main battle tanks. The impression that there is a closed coalition and that only Germany stands in the way of deliveries of main battle tanks is wrong, said Pistorius, who took over as defense minister on Thursday. “There are good reasons for surrender and there are good reasons against it.”

At the opening of the Ramstein meeting, US Defense Secretary Lloyd Austin announced new US arms sales worth $2.5 billion. However, no main battle tanks are included in the package.

Two days ago, various outlets reported that Foreign Minister Olaf Scholz (SPD) only wanted to deliver Leopard tanks to Ukraine if the US government provided Abrams main battle tanks. Until now, the United States government has not been willing to do this.

Defense Minister Pistorius had already rejected the statement that the federal government had this condition on Thursday night. “I don’t know of such a connection,” he said on ARD. too Government spokesman Steffen Hebestreit stressed on Friday that there was “at no time” a connection. However, the federal government sticks to the fact that there is “close international coordination” for all arms deliveries, especially with the USA

Austin also denied that there was a connection between possible German and American tank deliveries.

Read here: “I’m pretty sure” a decision on the Leopard issue will be made soon. USA deliver about 150 armored personnel carriers to Ukraine

Urging the Poles, who want to deliver 14 Leopard 2 tanks to Ukraine, Hebestreit said he had no information that the Warsaw government had already submitted a request for the tanks to be transferred. And he assumes that Poland also values ​​rules-based dealings with each other: “All of our partners certainly want to behave in accordance with the law,” he said of the possibility of passing Leopard tanks without the required German permission. According to Pistorius, the issue of export permits was discussed in Ramstein but not yet decided.

A spokeswoman for the Ministry of Economic Affairs declined to comment on Friday whether there are already industry requests to supply tanks to Ukraine. The Handelsblatt had reported that the group rheinmetall it could deliver a good 100 main battle tanks in 20 months. The spokeswoman only said that the government is in close contact with the industry and is examining all acquisition options.

The Bundeswehr only has a good 300 Leopard 2s left and can’t give away too many of them without jeopardizing the ability to defend the country and the alliance. Pistorius said his ministry would now verify the number of Leopard 1 and 2 and in what condition the Bundeswehr and industry kept them. It is also important that eligible tanks are compatible with vehicles that other nations may supply. The Leopard 2 is available in several different versions.

US Secretary of Defense Austin warned Western allies in Ramstein, in their support for the Ukraine Do not faint now: “This is not the time to sit down.” Rather, it is time to step up military aid, Austin said, speaking of a crucial moment for Ukraine.

The US calls for more support for Ukraine: “We have to intensify it”

Ukrainian President Zelensky thanked the assembled representatives of Western countries for their support to date. “We are seeing the results on the battlefield in Ukraine.” But the defenders of freedom were slowly running out of weapons. In Ramstein, concrete decisions would have to be made about the delivery of long-range planes, missiles and artillery, for example, in order to put an end to Russian terror.

Austin highlighted the new US aid package to the Ukrainian military, which includes the delivery of 59 Bradley and 90 Stryker infantry fighting vehicles. US aid to Ukraine totaled $26.7 billion, Austin said. He also thanked the countries that provided air defense systems, artillery or armored personnel carriers. The alliance is closed.

Federal Defense Minister Pistorius stressed that support to the Allies should be geared towards the specific needs of Ukraine. Air defense remains a priority. Germany will provide another Iris-T defense system and seven more Gepard anti-aircraft vehicles in February.

In addition, the German government announced earlier this month that it would deliver up to 40 Marder infantry fighting vehicles. Overall, the German “spring package” is worth around 1 billion euros, Pistorius said. Since the beginning of the war, the Federal Republic has supported Ukraine with arms totaling 3.3 billion euros.

More: Boris Pistorius doesn’t have time to settle in on his first day in office