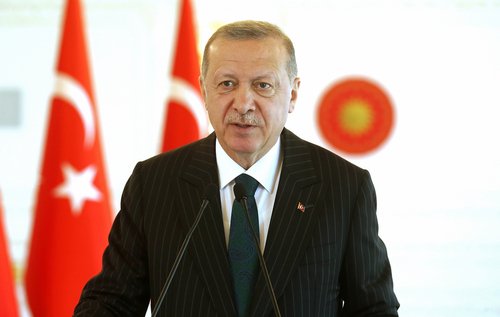 Recep Tayyip Erdogan, President of Turkey, warned officials in Stockholm today, Monday, January 23, that Sweden should no longer expect him to ratify its application to join NATO, according to gerceknews.com.

This came as a result of the recent incident in the Swedish capital where a A copy of the Muslim holy book, the Koran, was burned in front of the Turkish embassy.. Rasmus Paludan, leader of Denmark’s far-right Stram Kurs (Hard Line) party, received permission from the Swedish government to commit the act.

Speaking after a cabinet meeting in Ankara, Erdogan announced: “Those who caused such disgrace in front of our embassy should not expect any benevolence from us regarding their applications for NATO membership.”

He added: “If you love the members of the terrorist organization and the enemies of Islam so much, we advise you to delegate the defense of your country to them.”

As a consequence of the event that has caused anger throughout the Muslim world, a scheduled trip to Ankara by the Swedish defense minister, to further discuss the country’s entry into the alliance, has been canceled by the Turks. The Swedish ambassador was summoned after the incident and duly informed of Ankara’s feelings.

Any application to join NATO must be approved by all 30 member states. Sweden applied, along with Finland, after Russia invaded Ukraine on February 24. Hungary must also ratify its entry, but Turkey has made demands on Sweden that their claim to the government is impossible to meet..

Ankara officials insist that Stockholm extradite large numbers of what it describes as ‘terrorists’ before considering approving NATO membership. They are mostly Kurdish militants belonging to an alleged group that attempted a coup against Erdogan in Turkey in 2016.