Tens of thousands of people protest against Macron’s pension reform

According to union information, up to 400,000 people passed through the French capital on Thursday afternoon. “Working beyond the age of 60 is bad for your health,” read a protester’s self-painted sign.

More than 200 protest events took place across the country. According to the unions, more than two million people crossed France on the street, the French Ministry of the Interior spoke of 1.12 million participants. Strikes paralyzed the country: A large part of the long-distance trains of the SNCF state railways were cancelled, and local traffic was also seriously affected. Flight connections have been cancelled.

Schools and kindergartens remained closed due to a lack of teachers and educators. the energy company fed had to cut back on its nuclear power production because employees stopped working. Refineries in France were largely at a standstill.

Macron faces a major obstacle to his reform plans presented on January 10, which include raising the retirement age. The country’s eight main unions have called strikes and protests. This unity does not exist in the French union camp divided since 2010. Back then it was also about pension reform: Macron’s predecessor, Nicolas Sarkozy, had raised the retirement age from 60 to 62.

Under Macron’s plans, the age limit will now increase by three more months each year, reaching 64 by 2030. The government wants to abolish generous rules on early retirement for certain occupational groups, for example, for employees of the transport company of Paris or for employees of the energy sector. In the polls, a clear majority of the French are against the reform project.

The government’s main justification for reform is that an aging society is putting increasing pressure on social systems. Without countermeasures, Paris fears that the pension fund could register a deficit of 13.5 billion euros in 2030.

If Macron goes ahead with the reform, France’s general retirement age of 64 would still be lower than many other European countries. In Germany, for example, the age limit will gradually increase to 67 in 2029.

Macron warns against the blockade of France

To receive the full pension payment without deductions, according to the plans, new French retirees must have at least 43 years of contributions as of 2027. On the other hand, the new retirement age does not apply to French people who started work very early. 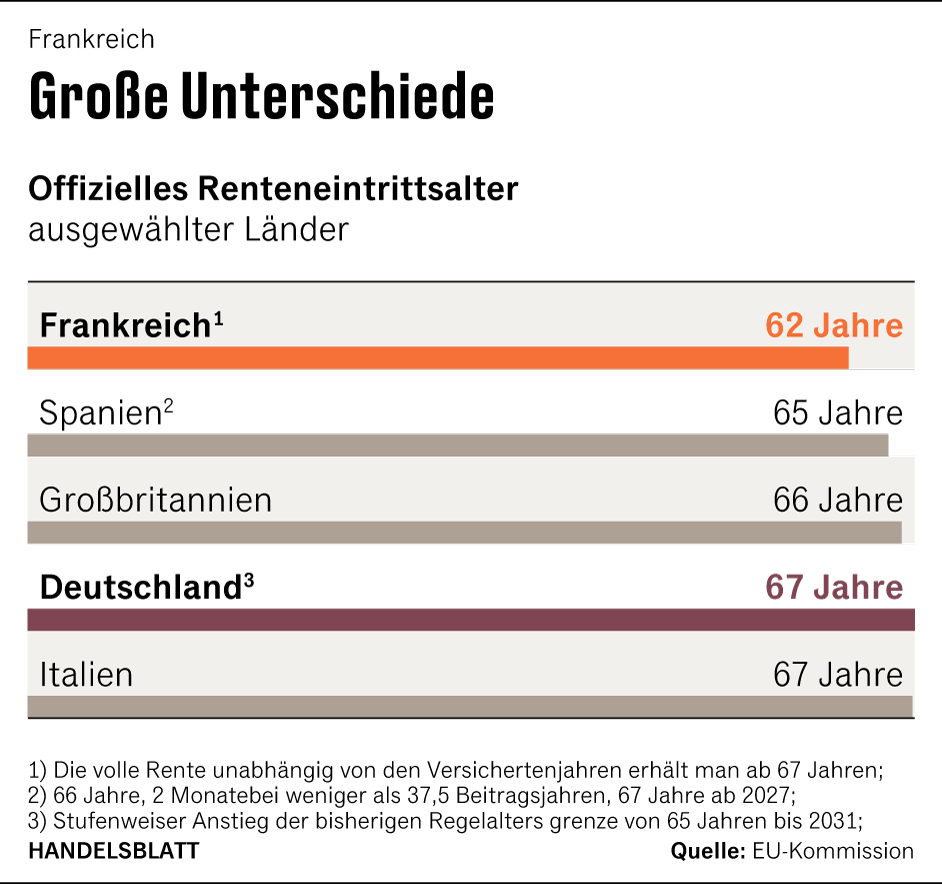 The Macron government promise: No one should have to work for more than 44 years. Therefore, anyone who has been working since the age of 16 can retire at age 60. There are also exceptions for people with particularly physically demanding activities who can no longer perform them in old age. In addition, Macron wants to increase the minimum pension by 100 euros to about 1,200 euros per month to improve the situation of people with low incomes.

The cabinet is due to approve the pension law on January 23 and it is expected to be approved by parliament by the summer. The reform is expected to enter into force from September 2023.

In the National Assembly, where Macron’s centrist government has not had an absolute majority since parliamentary elections last summer, the right-wing Rassemblement National (RN) and the left-wing alliance around the Indomitable France party oppose the plans. The conservative-bourgeois republican they have indicated that they could help the president to obtain a majority.

Macron had promised pension reform since he moved into the Élysée Palace in 2017. During his first term, he tried his hand at an even deeper restructuring of old-age security, in which different pension regulations would be scrapped entirely. professional groups and a uniform system of points for pension rights would be introduced. .

>> Read here: Macron wants to raise the retirement age to 64

The plans sparked months of protests, and at the start of the coronavirus pandemic in the spring of 2020, the president called off the reform attempt. Even after his re-election in April 2022, Macron initially waited and sought talks with unions and the opposition about potential compromises, to no avail.

The president warned against “locking down the country” on Wednesday. He accused Left Alliance representatives, who called for another “march for our pensions” in Paris on Saturday, of spreading “lies and falsehoods” about their reform plans.

The Government wants to implement the reform with determination

Macron was abroad during the protests: he traveled to Barcelona on Thursday to speak with the president of the Spanish Government, Pedro Sánchez, about joint energy projects and to sign a cooperation agreement between the two countries.

During his visit, however, the President could not avoid commenting on the demonstrations against the most important reform project of his second term. Macron said his proposal to restructure old-age security was “fair and responsible”. The government will continue on the path it has undertaken “with respect, in dialogue, but with determination.”. Meanwhile, the unions announced a new day of strikes for January 31.

More: It’s now or never: that’s why Macron has to push through his controversial pension reform this year