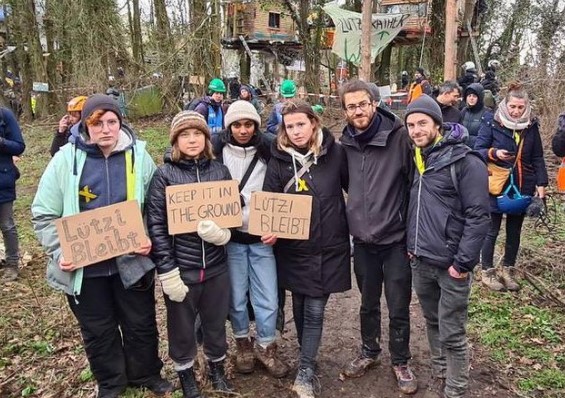 Among a group of protesters physically removed from a coal mine by police in Germany was Swedish climate activist Greta Thunberg.

Swedish climate activist Greta Thunberg was arrested for the second time in Germany today, Tuesday, January 17. She was part of a group of protesters who returned to the village of Lutzerath to demonstrate against its demolition to facilitate the expansion of the Garzweiler open pit. lignite mine.

After being forcibly removed from the area on Sunday the 22nd, the members of the group decided to return today. German policemen were deployed once more to deal with them.

According to the German media WDRThe detainees were taken about 50 meters from the area by the agents and then asked for their identity documents, as reported lavanguardia.com.

Swedish climate activist Greta Thunberg was among a group of protesters physically removed by police officers from a coal mine in the town of lutzerath this afternoon, Sunday January 15th. In pictures posted on social media, the 20-year-old was seen smiling as two police officers dressed in riot gear led her away.

The demonstration was taking place in the North Rhine-Westphalia region of Germany. The village is scheduled to be razed to expand an existing coal mine. Continued demonstrations by the activists led to the police eventually being deployed to forcibly evict them.

According to the German news outlet Bild, around 70 people were at the scene at the time of the incident. Following numerous requests to leave the area, the police were reportedly ordered to forcibly evict the protesters. At one point, in an attempt to disrupt their removal, some of them apparently ran into the adjacent fields.

Clashes between police and protesters have been going on for several days. On Wednesday the 11th, violence broke out after the German police received the green light to remove them. Authorities say at least 70 officers have been injured, while activists accuse them of ‘pure violence’.

The residents of Lutzerath abandoned their properties some time ago after German courts ordered them to leave. Despite the protests, there is no possibility of reversing the fact that the garzweiler coal mine will expand.

Already one of the largest open pit mines in Europe, it is operated by the energy company RWE. Garzweiler is a major source of lignite, which is used in coal-fired power plants.

Located near the West German town of Erkelenz, the group of activists had dug tunnels and erected temporary structures in the village in an attempt to prevent work from going ahead at the mine.

Nine of the activists ended up in the hospital, although none were seriously injured. The group disputes this claim and insisted that there have been various critics. A police spokesman confirmed that 154 possible crimes are currently being investigated.

Video footage posted on social media in recent days shows police attempts to remove the group. Policemen in riot gear can be seen falling into the muddy conditions with some of the protesters even throwing mud at them.

Why is the Spanish region of Catalonia banning electric scooters on public transport?