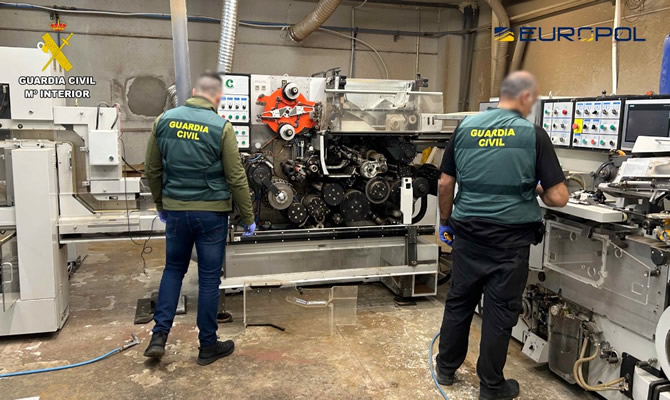 More than 3.5 million packets of contraband tobacco were seized during a massive operation involving the Spanish Civil Guard and Europol.

as reported in a sentence Today, Sunday January 22, the Spanish Civil Guard, in collaboration with Europol, has crushed a huge tobacco smuggling criminal organization. Three tobacco factories have been destroyed, with 27 people arrested.

Around 3.5 million packs of cigarettes without the corresponding tax seals were confiscated. They had an estimated value of 17.5 million euros. During ‘Operation FATACA’ another 10,000 kilos of tobacco leaves were also seized, worth more than 20 million euros.

The researchers made 24 entries and searches in homes, industrial buildings and shops in the Spanish cities of Seville, MalagaCordova, MadridAlbacete, Valencia, Zaragoza and La Rioja.

The operation began at the end of 2021, after the conclusion of ‘Operation Turkeys’. During this investigation, a clandestine tobacco factory was destroyed inside a chicken coop in the Seville town of Los Corrales.

As a result, the police detected another criminal organization that was moving large quantities of contraband tobacco. It had a very high level of activity throughout the national territory and in other neighboring countries. For this reason, the Civil Guard requested the collaboration of Europol to coordinate its operation.

Continuing with the investigations, it was soon revealed that the criminal organization had two clearly differentiated modus operandi. These allowed their leaders to distribute and supply tobacco packets without fiscal seals to the entire national territory and to other European countries.

They imported these containers through containers, introduced by various national and even international seaports. These tobacco products were introduced without declaring said merchandise before the customs authorities and therefore evaded the payment of the corresponding taxes (IIEE and VAT).

The second and main operation of the group was the clandestine manufacture of tobacco. These are at least 3 factories set up in Logroño, Valencia and Seville. Its locations allowed the organization to supply tobacco packets to all the provinces of Spain, in addition to distributing part of its production to other European countries.

Ukrainian citizens were found to be working in these factories. They had moved to Spain in an irregular situation or under international protection due to the ongoing conflict in the country.

These workers lived in said facilities, crammed into prefabricated modules, working long hours and without leaving the premises so as not to be detected.

The organization’s leaders reportedly laundered vast amounts of money, allowing them to maintain a life of luxury. They lived in farms with all kinds of luxuries in the Seville province and in urbanizations in the Costa del Sol Marbella town.

In the last stage of the operation, the investigators detected how this organization diversified its criminal activity, expanding its facilities towards large marijuana plantations.

The three clandestine tobacco factories were located in the towns of Alfaro in La Rioja, Los Corrales in Seville and Enquera in Valencia. These factories had advanced technology machinery. The value of these factories would be around 3 million euros.

Machinery was also seized in the Seville municipality of Estepa. The organization planned to set up a fourth factory in the other Sevillian town of Osuna, to continue increasing production and therefore profits. With the organization’s three factories, it could produce 540,000 packages a day.

As a result of the police operation, 7 properties and 25 vehicles were seized, as well as the blocking of bank accounts of those investigated.