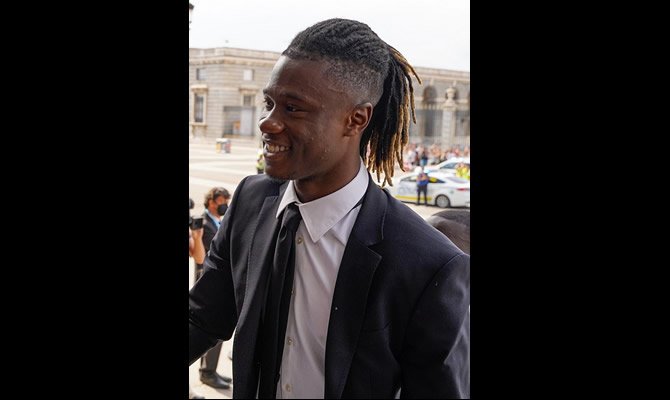 Image by Eduardo Camavinga. Credit: Wikipedia – By Archimadrid.es Photographs – Offering of the League and the Champions League-13-L.Millán, CC BY 2.0, https://commons.wikimedia.org/w/index.php?curid=118624182

Arsenal manager Mikel Arteta has made a surprising move to try and sign Eduardo Camavinga on loan from Real Madrid.

The big transfer news today, Friday 20th January, is that Arsenal are reportedly hoping to lure Real Madrid star Eduardo Camavinga to the emirates on loan. The Spanish coach of the London club, Mikel Arteta, is seeking reinforcements in his midfield for the second half of the season, according to Sun.

The signing of the young Frenchman would be a staggering coup for the current Premier League leaders if it goes through. Earlier today the Gunners announced the capture of Brighton’s Leandro Trossard.

Camavinga has found himself languishing in the pecking order at the Bernabeau behind Federico Valverde, Luka Modric and Tino Kroos. since he arrived at the club in a millionaire move. He joined in a last-minute move from Ligue 1 side Rennes in the 2021 transfer window.

The talented young player would certainly relish the chance to play in the first team if he moved to England. In their bid for a first title since 2003, Arsenal are currently five points clear of their nearest rivals. reigning champions, Manchester City, with a game in hand. They face the man United this Sunday the 22nd.