Pokémon Go is said to be the basis for the “world’s most detailed map”.

San Francisco Little cartoon monsters hop from house to house in downtown San Francisco, hide behind skyscrapers, and finally engage in a battle in the harbor. They’re scenes from the mobile game Pokémon Go, but the star of this presentation isn’t the digital monsters, it’s the map.

Behind the demo are John Hanke and his team at Niantic. The 55-year-old once worked at Google and was responsible for projects such as Google Earth. In 2015 he went freelance and, thanks to the strong Pokémon brand, created one of the most popular smartphone games in the world.

The recipe for success: Augmented Reality (AR). Virtual content is simulated in real time in the direct environment using a camera lens. And Hanke uses this success to create the “most detailed map in the world” with the help of the “Pokémon Go” fan base. Users must measure their surroundings with their smartphones: streets, buildings, plants.

Three-dimensional measurement should become the basis for completely new applications. “Existing maps just aren’t good enough,” said the Niantic manager responsible for the project. kjell bronder the Handelsblatt. This already applies to entertainment applications such as “Pokémon Go”. Monsters need to optically touch surfaces for the perfect AR illusion, and not float on top of them.

That is exactly what has been a big problem so far. Digital maps represent streets and roads, but are too inaccurate for buildings. Also simply because they can’t use live images: “The best maps in the world are constantly out of date. Cars, people or animals are moving,” Bronder said.

That is why Niantic is based on constantly updating the base of the map thanks to its players. As an incentive, users get in-game boosts by scanning real-world objects. Increasingly powerful smartphones are also helping. Apple It not only installs high-resolution cameras on its main devices, but also lidar scanners, which can record the environment with particular precision using laser measurement.

John Hanke positions his company as the countermodel of the metaverse of Facebook-Founder mark zuckerberg. “The Metaverse is a dystopian nightmare,” Hanke said. the GoalThe group is committed to virtual reality (VR) for its model: users are completely isolated from reality through 3D projection through glasses and headphones. This requires time and a correspondingly secure environment.

Niantic’s AR approach, on the other hand, is to use technologies to encourage people to “get up, get out there and connect with the people and the world around us,” Hanke said.

Niantic wants to be a platform provider

This, in turn, also works as a business model: At the start of “Pokémon Go” in 2016, restaurants and stores paid to have virtual monsters appear near their stores. That should attract customers. AR technology is now also being used for advertising, for example to place collection campaigns or animated magazine covers in stores.

with chip maker Qualcomm Niantic is now working on glasses that can project virtual objects into the real environment. Not only because of the little monsters, but also based on the environmental data collected there. However, a date for the market launch of the glasses and a price have not yet been set. These devices are still considered the future of the mobile screen, despite the fact that Google discontinued its AR glasses a few years ago due to lack of success.

Hanke sees his and Niantic’s role in creating the platform. Other companies can then develop games or other solutions themselves. The key must be the new world map. “You can think of it as a kind of GPS, only without satellites and with much higher precision,” Hanke explains.

The map must be so accurate that a user’s exact position can be determined solely from what they see around them. This should not only work outdoors as before, but also indoors. It would be a feature that goes far beyond existing cartographic material.

The new map was presented to the public for the first time in May. In the meantime, 100,000 locations have been measured, and according to Hanke, new data is constantly being added.

For him, it is also about the future of his company. According to data from market researcher Sensor Tower, “Pokémon Go” has achieved sales of more than $6 billion since its launch in 2016. But interest is waning.

Sensor Tower sees player spending within the app drop dramatically in 2022. Last year also saw the release of the manufacturer’s latest generation of Pokémon games. Nintendo in the market. The Japanese themselves are involved in the brand of monsters.

Niantic is challenging one of the world’s largest tech companies with the Meta Facebook group. The company spent more than $10 billion on its Metaverse projects last year. And founder Mark Zuckerberg has announced plans to further increase spending.

Niantic as a company was valued at $9 billion in its most recent funding round and has raised a total of $780 million in funding from investors, according to data from the Pitchbook platform. Bottom line: Despite the success of “Pokémon Go,” Niantic is small compared to the meta. 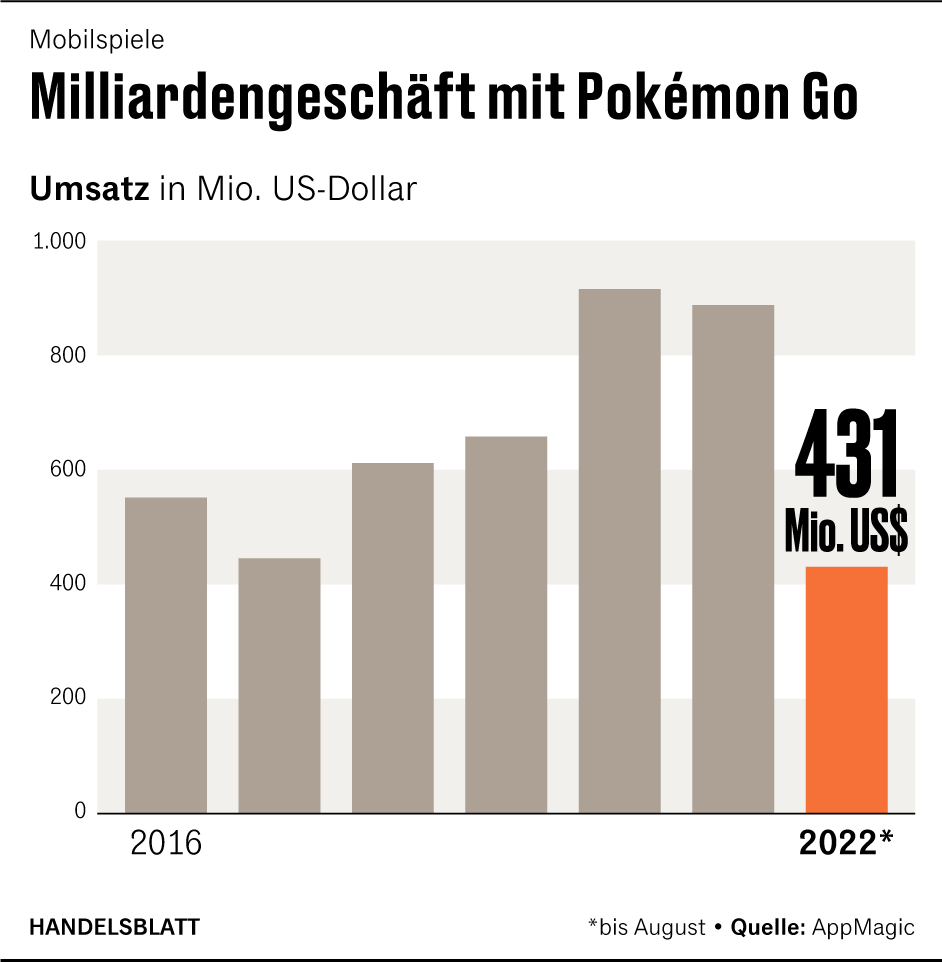 The pressure on Hanke is mounting because no other Niantic product has achieved similar popularity. Actually, a game with the next strong brand should become a new profit maker: Harry Potter. But two years after its 2019 release, it reached just 20 million downloads and nearly $40 million in sales, according to data from Sense Tower. On January 31, 2022, the game was finally put on hold.

Niantic enjoys a good reputation within the tech scene. The New York-based investment fund Coatue alone has invested $300 million. Coatue’s partner, Matt Mazzeo, particularly praised the plans for a 3D world map as motivation for investment, stating, “We see this infrastructure as the foundation of a metaverse for the real world and as a driver for the next evolution of Internet”. .”