frankfurt With another positive study, the US biotech group modern underscores the power of its mRNA technology. Its “mRNA-1345” vaccine candidate against respiratory syncytial virus (RSV) achieved a preliminary efficacy of nearly 84 percent in a large phase 3 study modern announced Tuesday night.

Therefore, the mRNA-based vaccine showed a high level of efficacy similar to that of competing vaccine candidates from Pfizer and GSK, whose data was published last year. Moderna now wants the vaccine in the first half of the year USA and submit for approval in Europe. Moderna’s shares rose more than 6 percent in response to premarket trading data on Wednesday, adding more than $4 billion in market value.

Paul Burton, Moderna’s chief medical officer, assesses the data as “really strong, strong, and therefore very, very encouraging results” compared to competing products. He believes that Moderna is in a good position to compete in the future RSV vaccine market.

So far, no vaccines against the RS virus have been approved. The virus is considered a global pathogen of acute upper and lower respiratory tract diseases. Most infections are harmless. But they can also become more dangerous, especially for the elderly and babies. The pathogen is responsible for more than half a million adult hospitalizations in the Western world.

The US agency CDC estimates that about 10,000 adults and between 100 and 300 young children die from RSV infections in the US alone each year. Vaccine developers are therefore counting on the fact that they can fill a significant unmet need with new vaccines.

>> Also read: Biontech, for its part, sues against the Curevac patents

In addition to GSK and Pfizer the American group is also testing johnson and johnson an RSV vaccine in advanced clinical trials. Also have Sanofi and the British company AstraZeneca submitted a co-developed antibody against RSV for approval, which can also be used prophylactically.

Intense competition in the vaccine market

In general, this new segment of the vaccine market is characterized by relatively intense competition, also at the technological level. Moderna’s mRNA vaccine is up against protein-based vaccines from GSK and Pfizer and a vector vaccine from Johnson & Johnson. 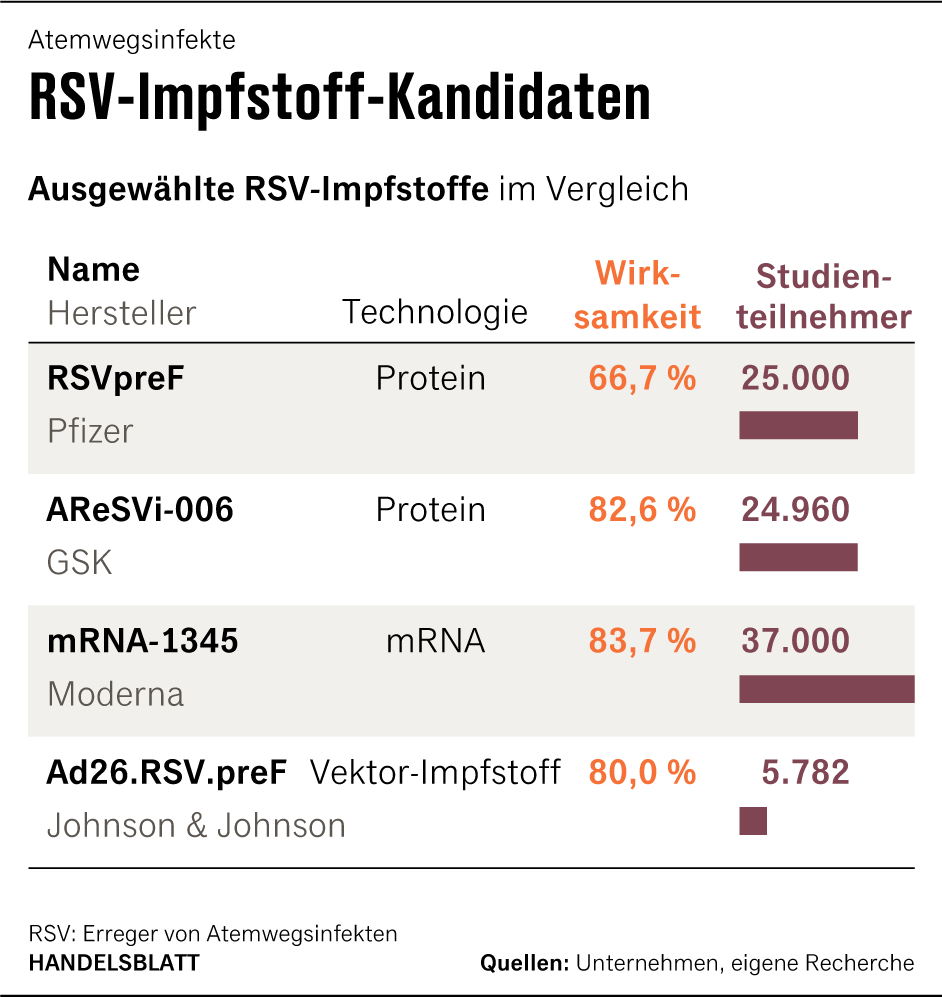 The study results are also of great importance to Moderna because they provide further evidence that mRNA technology can open up a wide field of application beyond Covid vaccines. The US company’s RSV study is the first successful phase 3 study with an mRNA vaccine against a pathogen other than Sars-CoV-2.

A few weeks ago, Moderna announced positive data from a phase 2 study with a cancer vaccine. The vaccine was then able to reduce the risk of recurrence in operated skin cancer patients by 44 percent and will now be tested in a relevant phase 3 study for approval. The results of these tests support the assessment of many experts that mRNA-based vaccines and drugs may be generally successful in the medium term.

Moderna is fully committed to the concept and assumes that the success of the corona product can be replicated relatively quickly with other mRNA active ingredients in comparable therapeutic fields. The RSV study seems to confirm this strategy.

The group is also currently testing cytomegalovirus and influenza vaccines in studies relevant to approval. Several other vaccine projects are in early stages of development. Also in oncology, after initial success in skin cancer, the company intends to rapidly initiate further studies in other types of cancer.

The Mainz company is also pursuing a similar concept. biontech, which has also started a number of vaccine projects, such as flu and malaria, following the success in developing the Covid vaccine. He also tests in the field of oncology. biontech various mRNA products in clinical trials. However, the Mainz-based company also relies on other technologies such as antibodies and cell therapies for cancer diseases. Despite the success of its mRNA-based Covid drug, Biontech sees itself as a multi-tech company.

The expected advantage of mRNA technology is that it can be used to stimulate cells in the body to produce any protein, and the corresponding mRNA constructs can be generated relatively quickly in the laboratory. Therefore, the technique is very flexible, although the basic structure of the mRNA active substances always remains the same. They consist of a strand of mRNA wrapped in a lipid envelope.

From the point of view of the mRNA players, this in turn promises relatively comparable safety profiles for the different products. According to Moderna’s manager Burton, this was also confirmed in the RSV study. In general, the vaccine is well tolerated and has not raised any safety concerns. It is assumed that, in general, it will show a favorable side effect profile similar to that of the Covid vaccine that has been used millions of times.