bangkok Federal Minister of Agriculture Cem Ozdemir is celebrating the project as a milestone, and it’s causing outrage in Southeast Asia: The European Union’s anti-deforestation regulation, which the German government says is expected to take effect by mid-year, aims to curb deforestation of forests around the world.

the governments of Malaysia and Indonesia, two countries that feel particularly affected by the plans, view the rule primarily as trade discrimination. They see the livelihood of hundreds of thousands of farmers in danger.

The core of the EU regulation is that certain raw materials and products can only be imported in the future if it can be shown that they were not produced in connection with deforestation. These are soybeans, beef, coffee, cocoa, rubber, timber, and also palm oil. According to environmentalists, its production has been the main driver of rainforest destruction in Southeast Asia in recent decades.

However, Indonesia and Malaysia, which together account for more than 80 percent of global palm oil production, feel the new rule is unfair to Europe. And now they are threatening a harsh backlash: In protest, the Kuala Lumpur government is considering halting deliveries to Europe altogether.

“If the EU makes it too difficult for us, we can simply stop exporting and focus on other countries,” warns Malaysian Deputy Prime Minister Fadillah Yusof.

“Europe needs us and we need Europe”

The politician, who is also Malaysia’s minister for raw materials, criticizes the fact that the documentation requirements of the EU regulation for his country’s palm oil industry are becoming a huge additional burden that is undermining competitiveness. of the industry.

Fadillah complained that the regulation was a deliberate attempt by Europe to block market access for palm oil and, in return, protect competing products such as EU-produced rapeseed oil. He plans to travel to Indonesia in February to discuss a joint strategy with his counterpart in Jakarta. “Europe needs us and we need Europe,” he says. “But everything has to be fair, we can’t discriminate against each other.”

The EU ambassador to Malaysia, Michalis Rokas, rejects the accusation of discrimination. The EU regulation affects all countries equally. Earlier this month, Indonesian President Joko Widodo and Malaysian Prime Minister Anwar Ibrahim pledged to work together “to combat discrimination against palm oil” at a meeting earlier this month. 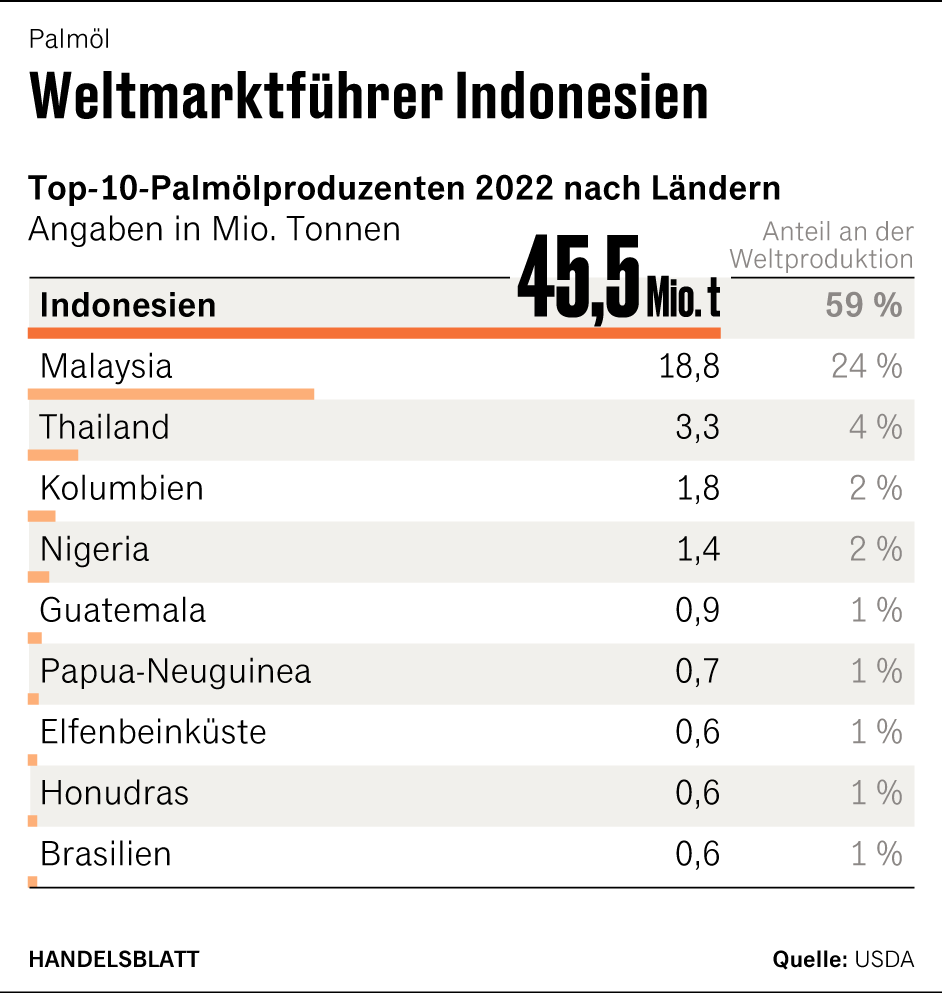 There have been conflicts for years over the raw material, which is used in many products such as ice cream, frozen pizzas, shampoos, candles and biodiesel. The environmental organization Green Peace It is assumed that in Southeast Asia in recent decades several million hectares destroyed rainforest used to establish palm oil plantations.

“We cannot afford to continue to cut down or damage forests in other parts of the world for our consumption,” Federal Minister of Agriculture Özdemir emphasizes in view of the EU’s plans. Making supply chains deforestation-free is therefore a true milestone.

In addition to the planned import ban, which will apply to palm oil from cleared areas from 2021, the EU also wants to phase out the use of palm oil in biofuels by 2030 due to environmental concerns.

This plan also creates controversy and strains relations with the main producing countries. In the case of Indonesia, which produces about 60 percent of the palm oil used worldwideThe provisions are also a major obstacle to concluding a free trade agreement, which the EU has been negotiating with Southeast Asia’s largest economy since 2016.

Countries do not find their efforts adequately recognized

Both Indonesia and Malaysia point out that they themselves have introduced measures to stop deforestation of rainforests. In fact, according to the Indonesian research institution Center for International Forestry Research, the problem has declined markedly in recent years after record deforestation in 2016.

The governments of Jakarta and Kuala Lumpur feel that progress is not appreciated enough. Indonesian President Widodo made it clear in December at the summit meeting between the ASEAN community of Southeast Asian states and the EU states that he considers the pressure from the Europeans unjustified. “It can’t be that one side always dictates the rules to the other and assumes that their standards are always better,” he lamented.

Environmentalists are critical of resistance to the EU directive. “The EU deforestation law does not pose a threat to trade if the Indonesian and Malaysian governments commit to stopping deforestation for palm oil,” says Kiki Taufik, who oversees the forest protection campaign of Green Peace responsible in Indonesia.

The Indonesian organization Madani, which works to strengthen civil society, warns of the danger that the EU regulation could exclude small farmers in the future. A survey carried out by the NGO showed that only a small fraction of them could provide the required evidence.

Those affected are millions of people who grow oil palm in comparatively small areas in Indonesia and sell the fruit through a network of intermediaries. The Indonesian environmental organization Kaoem Telapak also fears that the required traceability is not guaranteed at all or only with great effort.

Achmad Surambo, head of palm oil critical organization Sawit Watch, sees the danger that the EU will ultimately only change trade flows instead of actually solving environmental problems. “Indonesia can easily shift its market to China, India or Pakistan, which have laxer sustainability regulations compared to the EU,” he warns. “If that happens, there will be no improvements in palm oil management and deforestation will continue.”