Munich, Dusseldorf International investment recently collapsed, but German robotics startups remain popular. Last year, $617 million went into German companies. Although that is a good five percent less than the previous year, the German tech industry is in a good position by comparison.

Globally, the amount of funding collapsed by 42 percent to around $8.5 billion. In the US, only half of the money was invested in robotics, in Britain the least was 81 percent, as an analysis by venture capital firm Picus shows.

There are good reasons for the different development: Due to the shortage of workers and problems in the supply chain, robots are in higher demand in Germany. According to a survey by the start-up Fruitcore, almost half of German medium-sized companies plan to buy a robot. 14 percent already use one.

In addition, the offer and the know-how in German universities, institutes and companies is extensive. There are numerous spin-offs, especially in Bavaria, Berlin and in the Stuttgart and Karlsruhe region. Start-ups like Agile Robots, Franka Emika, Wandelbots or Fruitcore are making a name for themselves in the industry.

The dynamic development arouses the interest of investors such as Robin Godenrath, founding partner and CEO of Picus, which manages a portfolio valued at around one billion euros. “Robotics is a new area for us that we want to expand. We observed the scene intensively for two or three years to make the first investments”.

Fruitcore Robotics, for example, is one of the robotics specialists that has recently been able to raise larger funding rounds. The start-up, which wants to provide medium-sized companies with cheap robots, raised around €23 million from venture capitalists like UVC Partners and Capricorn a.

A similar target group has Robco, which has developed a kind of Lego kit for robotics. Led by Sequoia Capital, Investors recently invested €13 million in fresh capital in the company..

>> Read about it: Growth through Horst: Fruitcore wants to supply medium-sized companies with cheap robots

However, the negotiations on the funding rounds have become “significantly more difficult and longer,” says Helmut Schmid, board member of the German Robotics Association (DRV). Investors take a much closer look at the customer base, won orders, and business indicators.

Not only venture capital funds invest in the industry. The acquisition of start-ups by strategic investors is now more common, says Susanne Bieller, secretary general of the International Industry Association (IFR). “That can be a good path for both parties.” Established corporations could acquire new technologies, start-ups could benefit from development and sales capabilities. For example, ABB took over the mobile transport robot specialist Asti Mobile. jungheinrich in turn bought intralogistics specialist Arculus.

In general, the financial situation of robotics companies is good, says Bieller. The industry has overcome the brief slack from the corona and is back on the growth course. That makes them attractive to investors.
In 2021, deliveries increased by 31% to a record 517,385 newly installed robots. For the last year, the IFR world association expects another record of almost 570,000 units sold. Final figures are not yet available.

Best no money from china

According to the IFR’s Bieller, European companies often have offers from China, but are not comfortable with them. There is a risk that the latest funding rounds will no longer be successful with Chinese participation. “Either start-ups fail to really grow, or foreign investors take over and emigrate.”

Jens Riegger, CEO of Fruitcore, confirms the reservations. “We have received several acquisition offers from Chinese corporations, but we have rejected them. We want to maintain our independence and maintain control of our beloved project.”

>> Read also: Seven problems of humanity, seven possible solutions – You should pay attention to these technologies

Resignation has its price, says Bieller. Funding is harder to come by, especially “if you value money coming from Europe.” US and Chinese companies would find it easier to get a high valuation from domestic lenders, since large amounts of money are invested. 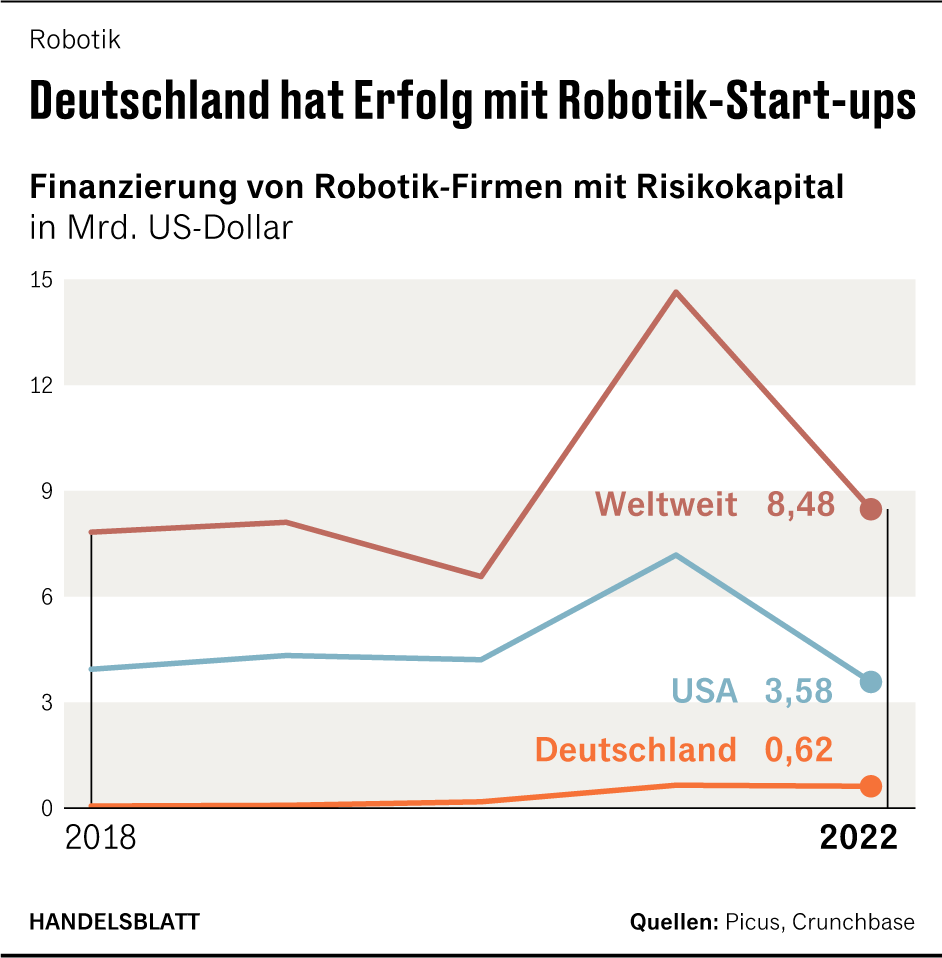 Alex Rohregger, robotics expert at Picus, quantifies the difference: “If a robotics start-up in Germany, for example, with sales of 300,000 euros is valued at 20 million euros, in the US it usually reaches $30 million with sales of $20,000.”

According to DRV’s Plaf Gehrels, this is a competitive disadvantage when trying to conquer the market quickly. He raises the question “what can we do from a European perspective against American and Chinese investors and their venture capital.”

According to Gehrels, the activities of the RAG Foundation to be. This forms a European robotics networkthat unites hardware and software specialists as well as integrators under one roof.

Trend towards software and rental models

Bieller sees a trend toward software-based business models among start-ups. “There’s so much good hardware out there already that you don’t have to reinvent the wheel every time.” Some young companies use grippers or robots from established manufacturers, for example, and develop apps to use them in service or for inspections, for example. . Developments in the software sector can be implemented faster and more cost-effectively and it is easier to find funders.

>> Read also: Artificial muscles and neurons: how robots should learn to feel

Godenrath of Picus confirms this: “Startups don’t necessarily have to build robots, they can also develop software to configure the robots. Users of this software no longer need to know how to program. A lot is currently changing in terms of ease of use. Digital and more accessible services are also emerging for robotics applications, for example, for ordering, maintenance or troubleshooting.”

Rental models, also known as “Robotics as a Service”, can also become a business for young companies. “If a robot is required for inspections at regular intervals, but not needed in the interim, a rental model may make sense,” says IFR’s Bieller. Especially for midsize companies that shy away from up-front investment, these models can be a gateway to robotics..

Even the above niche offerings are becoming more and more interesting for investors. “Particularly in the construction, agricultural, logistics and service robotics segments, there are practical fields with great growth opportunities,” says Olaf Gehrels, Vice President of the German Robotics Association. This is where the need for action is greatest and automation is still at a low level. “Without a doubt, we will see further development of new companies here.”

The IFR global association reported a growth of 37 percent to 121,000 robots installed in the professional services segment by 2021. In the hotel and catering industry, the number of deliveries nearly doubled, albeit at a relatively low level of 20,000 units.

More: “Now there is a massive investment”: why more and more companies use robots.