Greater energy efficiency is the key

“Ten percent is always possible”: with this appeal, the Minister of the Economy, Robert Habeck (Greens), urged the Germans to save energy last spring.

This step towards the decoupling of value creation and energy consumption can only be the first, which must be followed by others if the ambitious goals of energy policy in Germany are to be achieved. The country aims to become climate neutral by 2045.

On the one hand, the national economy must switch from fossil fuels to electricity whenever possible. On the other hand, the consequent increase in energy demand must be covered exclusively with renewable sources as far as possible. By 2030, electricity generation will increase to 750 terawatt hours (TWh).

This is 30 percent more than what is consumed today. At least 600 TWh of electricity should come from renewable sources within eight years. After all, the era of nuclear power in Germany should end very soon, the phase-out of coal should succeed quickly, and natural gas would then be largely dispensed with. Therefore, wind and solar power systems will be significantly expanded. Regeneratively generated electricity is becoming the key element and link in the energy transition.

Until now, little attention has been paid to the fact that a more efficient use of energy would significantly improve the chances of achieving these ambitious climate protection targets. The less energy businesses, public administration and private households need, the less energy will have to be generated or imported. Technically formulated: The same machine performance, brightness, cold or heat must be achieved with less energy input.

The problem with this: The first ten percent savings can still be pretty easy, and the second is possible with a little effort. But at some point each additional percentage saved becomes very expensive if there is no technological leap.
The experience of the last 50 years shows that such a decoupling of energy consumption and production is also possible over a longer period of time.

After the oil price shocks of 1973 and 1979/81, it was possible to keep energy consumption more or less constant until 1990, while total economic output increased by more than 80 percent in real terms during the same period. Previously, such an increase in energy efficiency had not been thought possible, since in the boom years of 1955 to 1970, primary energy consumption increased at almost the same rate as production.

Just two weeks before the start of the Yom Kippur War, which triggered the first oil crisis in 1973, the federal government had approved an “energy program” that called for a 35 percent increase in energy consumption by 1980 and another 20 percent by mid-1985. 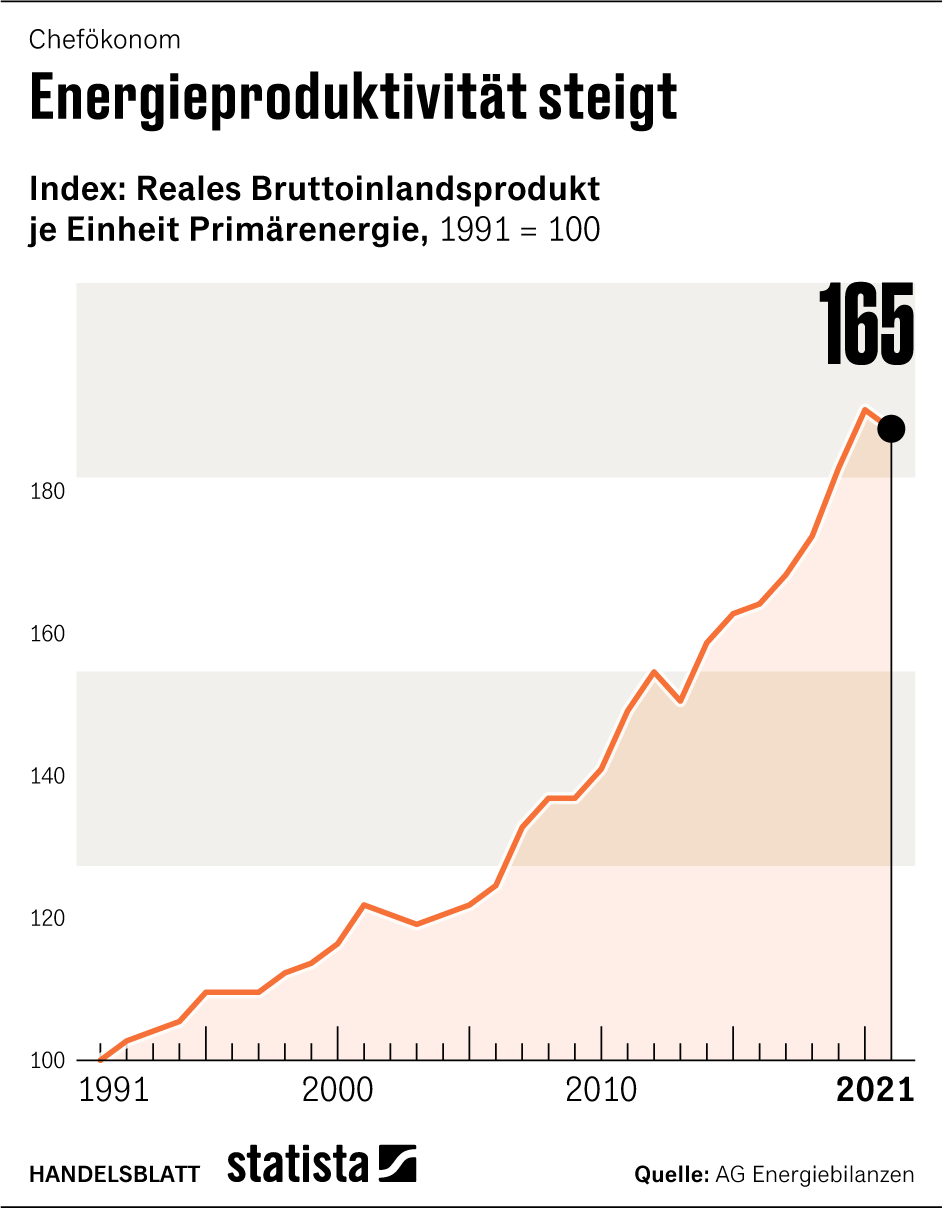 The government assumed that the national economy would grow in line with the trend of the last decades. In order to reduce dependence on oil imports, a rapid expansion of alternative energy sources and, in particular, nuclear power was sought; at the time, oil accounted for 55 percent of primary energy consumption. For 1985, reactors with an installed capacity of between 40 and 50 gigawatts (GW) were projected, which at that time corresponded to at least 35 nuclear power plants.

It is true that these plans never came to fruition. At their peak production in 1989, the 21 existing nuclear power plants generated 23 GW of electricity. At that time the last nuclear power plant in the Federal Republic went into operation. On the one hand, social resistance to nuclear energy due to the lack of a repository and the increasing costs of construction and operation prevented further expansion.

On the other hand, economic growth and energy consumption were decoupled due to the increase in energy prices. The market mechanism worked like a textbook: in view of the increase in prices, the demand for energy fell significantly. Many companies had succeeded in adapting their products, manufacturing processes, and business models to the new pricing relationships.

>> Read here: Return of oil and gas, rise of renewable energy: these are the strategies of the energy giants

In addition, the structural change from an energy-intensive industrial society to a service society contributed to the decline in consumption. In addition, the first standards for the thermal insulation of buildings and energy saving date from the late 70s.

After reunification, this disengagement process accelerated. Gross domestic product has increased by 57% in real terms over the last three decades, while primary energy consumption has decreased by 15% by 2021. The industry has managed to reduce energy use per euro of gross production value by an average of almost one percent per year since 1991, and in the trade, commerce and services sectors it was even two percent.

In retrospect, therefore, it confirms that a growing economy and decreasing energy consumption are compatible as long as the market produces innovations, as the example of lighting illustrates. First, the 100-watt bulbs were replaced by 70-watt halogen bulbs, then by 23-watt energy-saving lamps, and finally by 11-watt LED lights, so today the same brightness is generated with only 11% of the Energy. use.

Even if the efficiency potentials that have been realized so far have been considerable in macroeconomic terms, it is important to increase this pace in the coming decades. German industrial companies must double their energy savings if they want to achieve climate protection targets. Estimates from the Digital and Electrical Industry Association show that this is possible. According to this, at least 200 TWh of energy can be saved annually in German industry with existing technologies, almost a third of the total requirement.

One way to tap into this potential is through higher energy prices, for example by increasing CO2 taxes. Of course, there is a risk that energy-intensive production migrates and harms Germany as a place without benefiting the climate.

Another way to promote innovation processes would be more favorable depreciation rules, which often have the effect of boosting investment. “We want to create an investment premium for climate protection and digital economic goods,” the traffic light parties promised the companies in the coalition agreement.

So, the intention to introduce super cancellations is there – the economy has only been waiting in vain for the implementation of this correct idea.