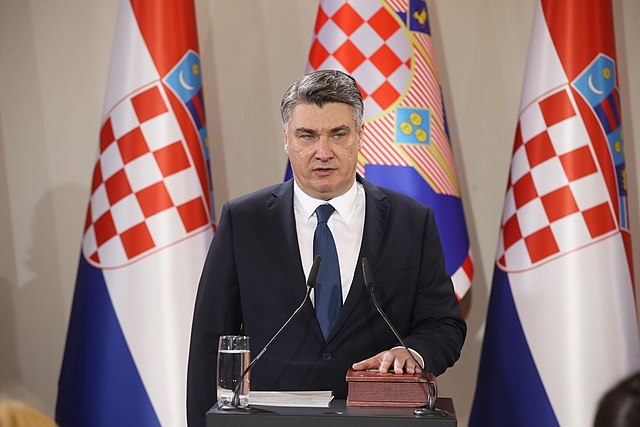 Zoran Milanovic, the President of Croatia criticized the EU’s recent treatment of Hungary.

Zoran Milanovic, President of Croatia, criticized the EU yesterday, Friday, January 20. After talks with Katalin Novak, his Hungarian counterpart, the leader condemned Brussels for financially sanctioning Hungary for its alleged violation of the rules of the rule of law.

Speaking in budapest In a press conference, he insisted that the bloc faces being torn apart by the continued defense of democratic standards in member states by those in Brussels. Billions of euros in funds earmarked for Budapest have recently been frozen by EU decision makers.

Milanovic pointed out that this desire by the EU to have full control over the members of the bloc had already led to the departure of the United Kingdom. He did not want the EU to become a ‘United States of Europe’, he continued.

He warned: “This kind of approach, between the EU and Hungary, is deeply galling. Today it is Hungary, tomorrow it will be a bigger country that will have to be ‘taught a lesson’”.

The Croatian president, known as a left-wing and liberal candidate, came to power at the end of 2019. However, Milanovic has recently been accused of turning to populist nationalism and going pro-Russian, something he has denied.

He continues his criticism of the West and its policies towards Russia and the Balkans. He recently expressed his opposition to the Ukrainian army being allowed to train in his country. Milanovic is also opposed to Sweden and Finland joining NATO.

Earlier this week the The president openly accused the West and Washington of using Ukraine as a means to carry out a proxy war with Russia.. On the issue of sanctions against Moscow, according to the Hungarian leadership, he refused to support the sanctions, commenting: “The question is how much harm these sanctions will bring us. It creates harm to Europe”.

“We managed to bring Russia and China closer together. In whose interest is this? All of those questions will have to be answered by me, especially by those who are making those decisions on my behalf. I demand an answer,” Milanovic continued.

On January 1, Croatia became the latest addition to the 27-member Schengen Area that allows free travel in Europe. Speaking at the same press conference yesterday as Milanovic, Katalin Novak expressed delight that her neighboring country had joined the zone.

Now that the border fence between his two countries has been removed, it can only facilitate travel and also improve tourism, he stressed, as reported by euronews.com.