Climate saver or environmental sin? This is how LNG affects the German CO2 balance 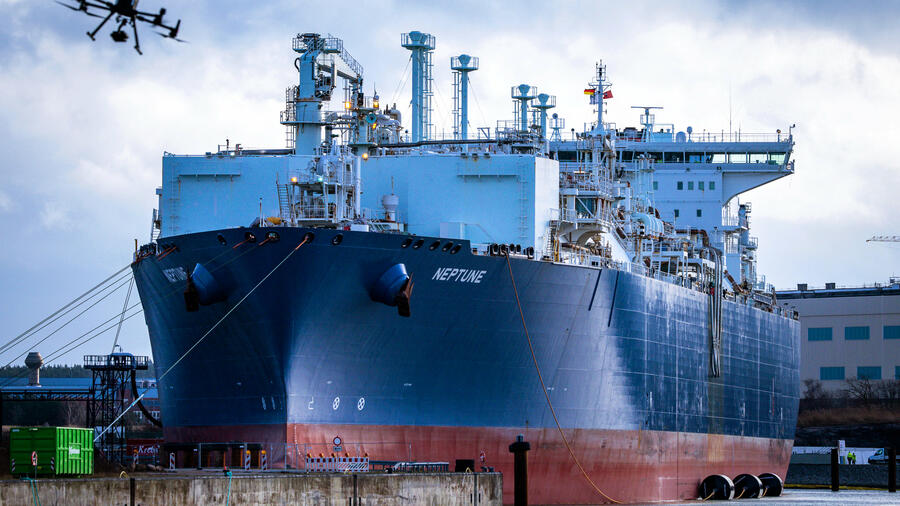 dusseldorf Germany increasingly covers its natural gas needs with liquefied natural gas. According to the market research company Icis, Germany imported around 485,000 gigawatt hours of natural gas from Belgium and the Netherlands last year, more than four times the previous year. The two countries, in turn, increased their imports of liquefied natural gas (LNG) by around 120 percent in favor of Germany. At the same time, Germany barely delivered gas via pipeline to France, which is why France doubled its LNG imports.

Germany’s gas requirements thus ensure increased imports of LNG into several European countries. And also the first German LNG terminals, which have recently made it possible to import liquefied natural gas directly into Germany, have aroused enthusiasm among politicians and businessmen.

But this has consequences for the environment. It is almost forgotten that Germany had deliberately decided not to import liquefied natural gas for decades. One of the reasons for this: the poor climate balance of LNG. Because part of the liquefied natural gas comes from countries as far away as the United States or the Arabian Peninsula. Ships transport it thousands of kilometers and emit CO2 in the process. The massive imports of LNG from Europe raise the question of how big its impact on the climate is.

The federal government actually wanted to use gas as a bridge technology to speed up the energy transition. In mid-April, the last three nuclear power plants in Germany will be permanently disconnected from the grid. And Germany also wants to phase out coal-fired electricity generation by 2030, at least in the West.

Until there is enough renewable energy and storage, many new gas-fired power plants are expected to fill the void left by the closure of coal and nuclear plants. When burned, the gas emits less CO2 than coal, which should ease the climate more quickly. But does this logic also apply if more and more gas arrives in Europe in the form of LNG?

Climate expert Jens Burchardt from management consultancy BCG says: “CO2 emissions from combustion in power plants are just as high with LNG as they are with pipeline gas, because LNG is simply gas that has been transported in liquid form”.

>> Read also: German ports will become the main centers of energy and raw materials in Europe

Logically, when gas that was previously liquefied and then regasified is burned, as much CO2 is released as when gas that came to Germany through gas pipelines is burned.

But there is still a climatic difference between the two forms of gas. This is due to so-called pre-chain broadcasts. These already occur during gas production, because methane escapes during this process. According to Burchardt, how much depends on the location of the conveyor and the technology of the conveyor, and how much the conveyor invests in minimizing leakage.

“out of gasoline Russia it has always been significantly ‘dirtier’ than Norway’s because Russia has much older and less efficient plants and less stringent controls on fugitive methane emissions,” Burchardt said.

In addition to the methane that is released during production, upstream emissions also include the methane that escapes during the long transport through the pipeline. This also has a negative impact on the balance of Russian natural gas, which comes from far away Siberia. According to a 2018 study by the Federal Environment Agency, emissions upstream of the Russian pipeline are around four times higher than those in Norway.

But as bad as Russian pipeline gas is for the environment, LNG is often even worse. According to the study, upstream LNG emissions are 2.2 to three times higher than Germany’s 2018 natural gas consumption mix, which consisted mainly of Russian gas.

Burchardt explains: “With LNG, long-distance transportation through large pipelines is no longer necessary. For this, energy must be used for liquefaction and regasification. There are also emissions from maritime transport, both from degassing and from the propulsion of the ship itself”.

“The more climate-damaging the fuel, the cheaper it will be to generate electricity”

These emissions vary depending on the distance from the producing country to Germany. According to Burchardt, the LNG coming from Norway only generates 10 to 15 kilos of CO2 per megawatt hour before it reaches Germany. With US LNG, on the other hand, it is 60 to 80 kilos.

The 60 to 80 kilos of LNG from the US increases the total CO2 emissions caused by one megawatt hour of gas, including combustion, by around a quarter. In general, American LNG produces about 260 kilos of CO2 per megawatt hour. According to Burchardt, in the worst case, this is about ten percent more than would be the case for the Russian pipeline.

However, the bottom line is that LNG is still a much better option than coal for power plants. First, if the LNG comes from neighboring countries, it may have even lower upstream emissions than gas from Russian pipelines. Secondly, according to Burchardt, during the extraction, transport and combustion of coal, about 330 kilos of CO2 are produced per megawatt hour. With lignite it is up to 400 kilos.

If you look at the costs of the respective power plants and fuels, it becomes clear why Germany has been heavily dependent on lignite for a long time. “The trend for most fossil power plants in Germany is: the more climate-damaging the fuel, the cheaper it is to generate electricity,” says Burchardt.

More: These are the strategies of energy companies