Bavaria receives the most funding from the federal government

Sedan After a year of wrangling, the federal and state governments have agreed in principle on how they will approach its future. fiber optic network expansion they want to promote in non-economic regions. The Handelsblatt has a corresponding key issues document, which both sides want to discuss in the coming week.

The new program should possibly start in April, as stated. To this end, the federal government wants to divide the three billion euros between the federal states, but not according to the usual Königsteiner key, which is based on the tax revenue and population of the federal states.

Rather, the federal government used the broadband atlas to determine how many homes do not yet have a fiber optic connection and are also in an area where expansion is not worth it. Overall, this affects almost ten million households. Two million of these homes are in Bavaria. There are more than a million in North Rhine-Westphalia and Baden-Württemberg.

Consequently, the municipalities of these federal states can count on the largest amount of federal funds. Mecklenburg-Western Pomerania will take up the rear among the non-city states. In principle, each federal state should receive 100 million euros to support the expansion of fiber optics in uneconomic areas. According to the Federal Digital Ministry, it is worth expanding privately for around 92 percent of households.

More than a billion euros for three federal states

€50 million will be reserved each for the city states of Berlin, Bremen and Hamburg. There, expansion often pays off even without state aid. In addition, the new distribution key will enter into force, according to which Bavaria will receive 450 million euros, North Rhine-Westphalia 400 million euros and Baden-Württemberg 320 million euros.

Bavarian Finance Minister Albert Füracker (CSU) welcomed the basic agreement with the federal government, noting that Bavaria itself had already invested more than two billion euros in the expansion of fiber optics. The federal states are “in constructive talks” with the federal government, he told the Handelsblatt. “However, some details have not yet been finally clarified. But one thing is clear: now speed is required. Much time was lost due to the funding interruption in October.

Alexander Schweitzer, Rhineland-Palatinate’s Minister for Digitalization, also welcomed the progress. The pillars are “a solid foundation for targeted broadband funding that does not repeat the mistakes of the past,” he told the Handelsblatt. However, “there are still open questions that we will now discuss further in dialogue with the federal government.” Rhineland-Palatinate will receive 210 million euros this year.

The questions that the federal and state governments want to clarify in the coming week include the instruments with which the federal government wants to prioritize projects in the future. For example, company commitments in market research procedures should no longer be binding if “the development area in question is very attractive for private development.” 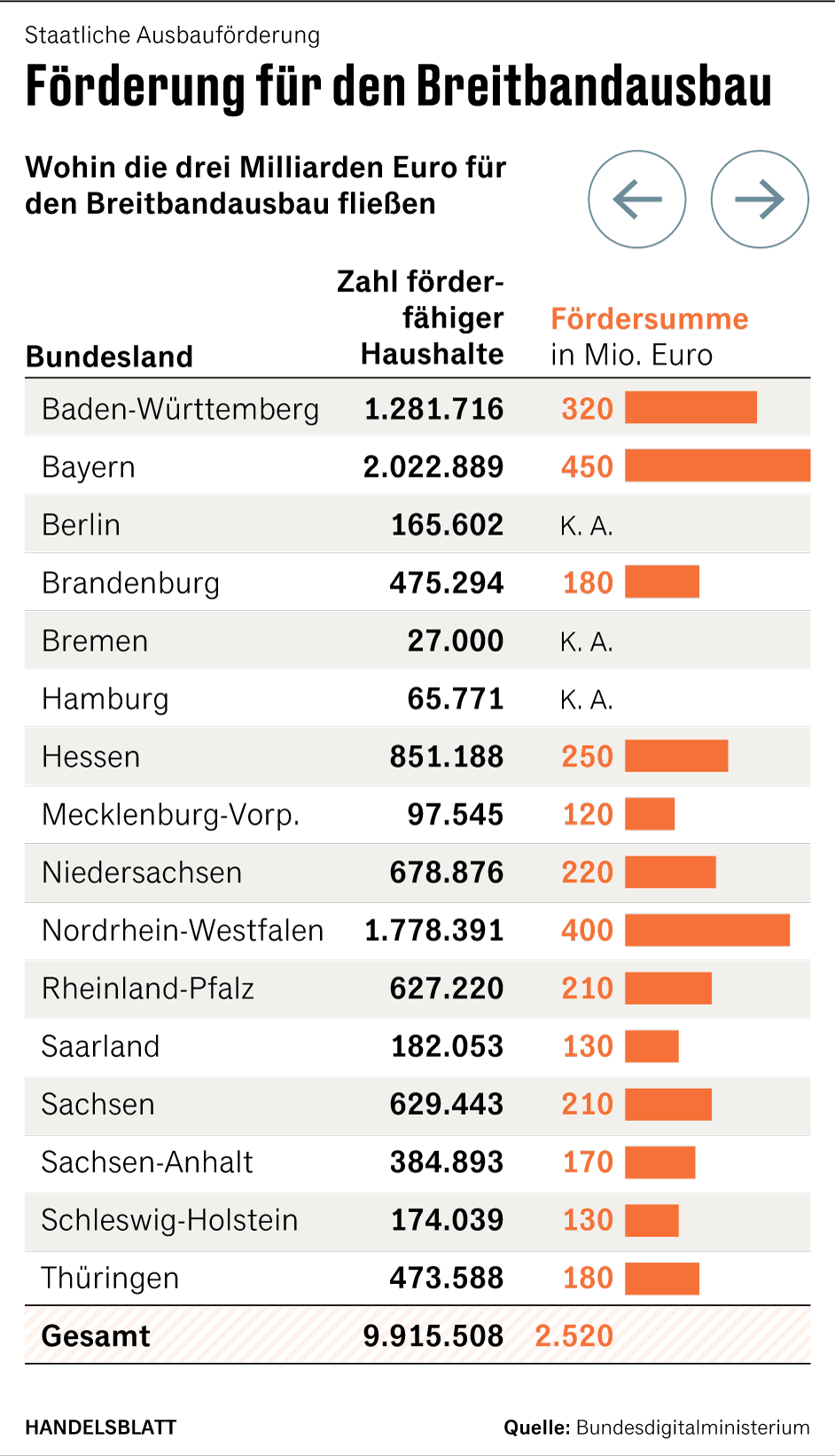 At the same time, municipalities must prevent a private company from laying its own fiber optic cable after a subsidized extension. Digitalization Minister Schweitzer called on companies to be more transparent, “for example, when providing data or with a view to concrete expansion commitments.”

The companies, however, caution that market research procedures “will initially focus on municipalities where there is still a high proportion of households with particularly poor Internet service or where subsidies will be used to supplement a fiber expansion.” planned self-financed optics in the sense of nationwide coverage”, says Sven Knapp explained by the Federal Association for Broadband Communication (Breko) on request.

Priority should be given to municipalities with low internet coverage

The new funding strategy also provides for municipalities to carry out “industry dialogues” and explore the potential of the private sector. and point out alternative placement methods. In principle, “all municipalities” should also be able to apply for funding from the federal government.

Requests from municipalities with poor internet service of less than 50 megabits per second “are approved immediately.” Only then should other municipalities be allowed to apply for state budgets. However, the federal states consider this so-called “fast lane” to be of little use in practice.

Originally, the traffic light coalition had planned to limit new funding for the 16 federal states to a maximum of one billion euros. This was to prevent private sector expansion from being further crowded out. This currently occurs because there is hardly any free capacity left in the construction market to lay fiber optic cables. If too many municipalities announce projects, this creates more scarcity.

On the other hand, companies must be attentive at the national level to the planned tenders to find out if they intend to build on their own in the area and register it with binding effect. These so-called market research procedures by the public sector immobilize capacities. Since this year, the state has also been able to provide financing where there is no private expansion. Previously, this was only possible to a limited extent.

More: How Germany wants to protect its telecommunications networks