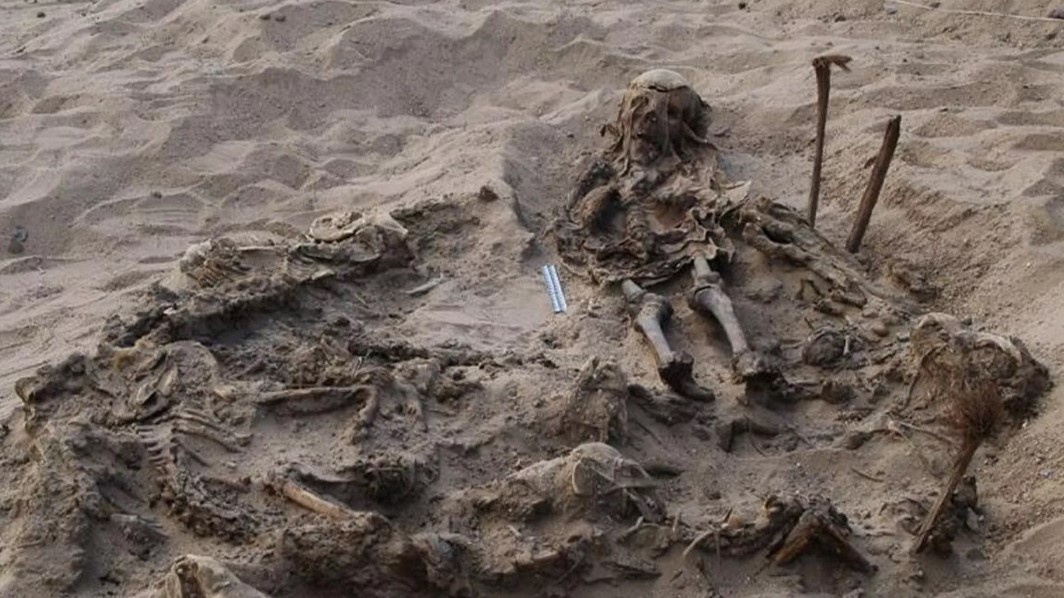 According to the website of the Egyptological Research Center of the Russian Academy of Sciences (CEI RAS), archaeologists in Egypt have found a mysterious burial site. It contained the skeleton of an eight-year-old boy along with 142 dogs.

This incredible discovery was made in the Faiyum necropolis, west of the Nile River, about 62 miles south of Cairo. The oasis is surrounded by the remains of several ancient towns located not far from the city of Crocodilopolis/Arsinoe, which was dedicated to the crocodile god Sobek.

“An eight to nine-year-old boy was placed on top of the bodies of 142 dogs of different ages, mostly puppies (87 percent),” the Academy detailed. They estimated that the burial site belongs to Roman times and dates to somewhere between the 1st century BC and the 1st century AD.

Previously, only one case of the burial of a child with dogs was known. This happened: “on the territory of the elite necropolis of Hierakonpolis (HK6)”, according to the Russian Academy of Sciences.

“Burials such as those discovered by the Center’s specialists are not typical of Egypt. The mass burial of dogs may indicate a synthesis of the religious and magical ideas of the Egyptians and foreigners living in Fayum, which gave rise to new forms of ritual practice,” the website continues.

This unusual finding was also reported today, Wednesday, January 18, by the daily heritage. The media outlet indicated that the remains of the animals were examined by zoologist Galina Belova. In her opinion, they all died at the same time. There are no signs of violence against them, she emphasized.

A blue colored clay was present on the dogs’ bodies. This was apparently common in reservoirs in Ancient Egyptian times. Perhaps there was a flood and the animals drowned, the expert suggested.

Exactly why a child is in the grave is a mystery. He maybe he took care of the dogs that the publication offered. However, the fact that the baby had a linen bag on its head was confusing.

As the daily heritage Clarified, archaeologists previously found a tomb on the same site in which a similar bag was also found on the head of the deceased. At that time it was believed that the person buried in it, most likely, was executed, since he had an arrow through his heart.