ABSOLUTELY FABULOUS FRESCOES – Spain has some of the best, plus an ‘unlucky’ example or two!

FROM cave paintings to church frescoes and modern murals of epic scale, countless artists have left their mark on Spanish architecture throughout the centuries for visitors to enjoy today. Not all of them are frescoes in the strictly technical sense, but whether classic or street art, some Spanish murals are downright impressive. 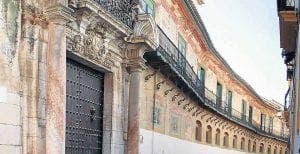 Spain -and Europe- is the hottest place in summer… and Ecija, in Seville, also has some of the most beautiful frescoes in the country. The graffiti in the Peñaflor Palace are 60 meters long and were created by the artist Antonio Fernández in 1764. 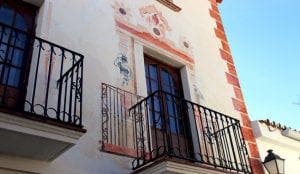 The secret murals of Estepona

It is world famous for its gigantic murals. But more historical street art has recently been discovered during restoration work in various corners of the city. Appearing to depict a woman in a crop top holding a pomegranate, this Baroque Banksy dates from the 18th century. Found in a house on Mondejar street, it has been restored to occupy its rightful place on the route of the murals. 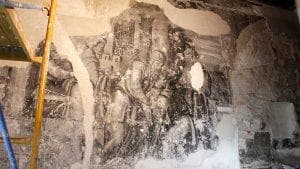 A series of religious frescoes from the 17th century recently discovered by accident when the owners of the house in Plaza Abdón de Paz, in Toledo, were renovating it. The whitewashed walls of the traditional courtyard house hid impressive paintings depicting the parable of the prodigal son and other religious scenes. The family renewal project continues, this time with the help of a team of archaeologists. 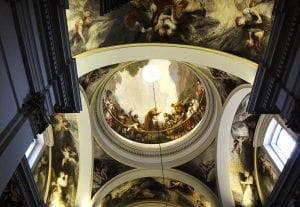 The Royal Chapel of San Antonio de Florida has a jewel that matches its royal name: the ceiling and dome frescoes by the great Francisco de Goya, painted in 1798. They depict Saint Anthony of Padua resurrecting a man from among the dead. dead to clear their innocent father of murder charges. Goya took just six months to complete. 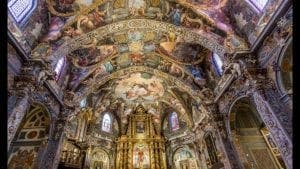 With its 2,000 m2 of domes, columns and towering arches –double the dimensions of the Vatican–, the frescoes in the Church of Saint Nicholas are a prodigy of Baroque art. Finished by Dionis Vidal at the end of the 17th century, they are so detailed that it is impossible to take it all in. They are divided in two to represent the life of Saint Nicholas of Valencia and Saint Peter of Verona. 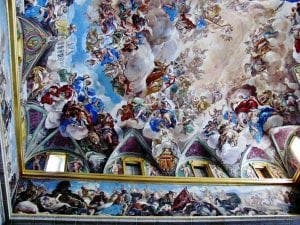 The historic home of the Spanish monarchs has as many impressive frescoes as legends. From this colossus that reigned over the city of Madrid from its northern hills, King Felipe II could sit in the library and reflect on art representing the seven liberal arts: Rhetoric, Logic, Music, Grammar, Arithmetic, Geometry and Astronomy. Most of the frescoes in El Escorial were painted by the 16th-century Italian sculptor and muralist Pellegrino Tibaldi. 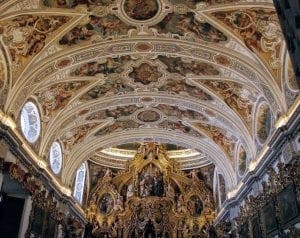 Frescoes of Saint Louis of France

Recently restored, the church of San Luis de los Franceses exhibits some of the best examples of Spanish Baroque art in the country. It is not so famous for the number of frescoes as for its harmony with the architecture. With ornate artwork sweeping through arches, cupolas and cupolas, completely obscuring the supporting pillars, it’s hard to see where the painting ends and the church begins. 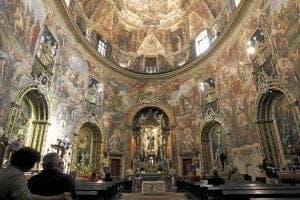 Frenzy of the fresco of San Antonio de los Germanos

Founded in Madrid by Felipe IIl at the beginning of the 17th century, the church of San Antonio de los Alemanes is a huge wall-to-wall fresco. It is also the only church in the region with an elliptical shape. Originally built next to a hospital for Portuguese immigrants, it was later rededicated to German immigrants. The frescoes are by Luca Giordano and Francisco Ricci, the former a prolific Neapolitan court painter known for his speed of painting, nicknamed Luca fà-presto (Luca-get-done-quick). 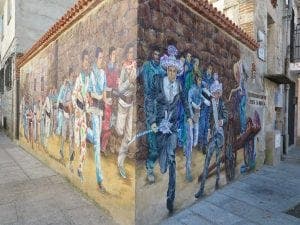 Fresnedillas de la Oliva used to be a ghost town, like many other towns in the north of Madrid abandoned by their inhabitants to work in the city. To encourage people to return, the council devised the Casas con Vida project to restore ruined houses in the village. Artist Elena Parlange was commissioned to embellish them, and her impressive murals give the town a bright new tone. 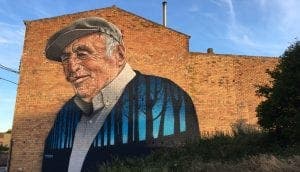 Art flourishes in the most extraordinary places and surprises await around every corner of this town in Lleida (Catalonia). Penelles may have only 500 inhabitants, but this small town has become a reference point for street art and painters from all over Europe come here to leave their creations. Many of the murals tell the story of the town and its inhabitants, such as El tato and El sisón, a native bird of Lérida. 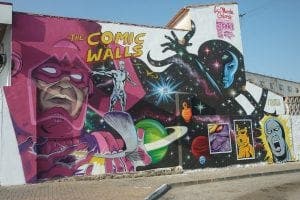 The funny walls of El Provencio

Galactus lives in the walls of El Provencio, Cuenca, along with the Silver Surfer, Captain America and other comic book heroes. The origin of these original works of art was the Comic Walls initiative organized during the International Comic Convention. Introduced in July, attracting fans across the country who agree, El Provencio is a ‘Marvel’ comic.

The Ecce Homo in the Zaragoza town of Borja is famous for all the wrong reasons. It was just another of the many sacred paintings found in Spain until 2012, when a well-meaning resident decided to do a bit of restoration work, with amusing results. The figure of Christ on the canvas took on a more comic look and became the laughing stock of the Internet. But this previously unknown town is laughing too, all the way to the bank, having welcomed more than 200,000 visitors since then. 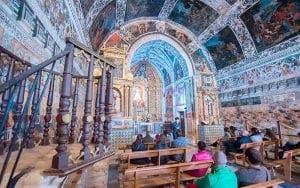 Appearances are deceptive… If you were to come across this modest sanctuary in Badajoz, you would never guess that it houses a treasure known as the Sistine Chapel of Extremadura. Olive trees and streams surround the Hermitage of the Virgen del Ara in Fuente del Arco. It’s surprisingly large for a chapel in the middle of nowhere, but the whitewashed walls give no idea of ​​the magnificent polychrome frescoes inside.